One of the key reasons for staging Manx Litfest is to provide a platform for 'Manx' writers (and by that we mean Manx-born or Isle of Man-based), both past and present.

Arguably the most famous Manx writer - although he was actually born in Runcorn, Cheshire - was Sir Hall Caine, who in his pomp during the late nineteenth and early twentieth century was one of the biggest-selling authors around, and that includes Dickens, Stoker (a great friend of Caine, who dedicated Dracula to him) and Hardy. Caine was a member of the Manx Government for a time, had an airport in the Island named after him, and Alfred Hitchcock's final silent film, The Manxman, was based on one of Caine's novels.It's strange then, that today Caine is largely unknown outside of the Island, most of his books out of print or difficult to source.

If there's one place in the Isle of Man with which Caine is synonymous, it's Greeba Castle, which Caine bought in 1896 and fixed up, living there until his death in 1931.We'll be featuring Caine, and a host of other Isle of Man writers, on our website in the run up to the festival, so we won't go into too much background about him here. 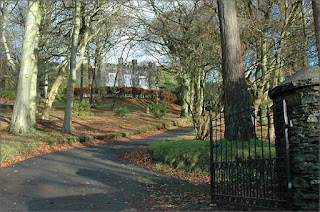 What we can reveal is that, working with Caine's great granddaughter who still owns Greeba Castle (picture courtesy of Peter Killey at manxscenes.com), we're looking to use the castle during Manx Litfest as a venue for a talk (hopefully two...) on Caine. These will be limited ticket events (it might have the word 'castle' in its name, but there are no huge rooms to seat hundreds) so keep an eye out on our website, on this blog, on Facebook and in the media for announcements about when dates and times are firmed up and tickets go on sale.

Thanks for reading.
Posted by Manx Literary Festival at 1:37 PM