We may have mentioned this way back when, but now that the first ever Manx Litfest is just around the corner (September 27-30) it's time to officially announce it - and give you fine people the chance to win a prize. 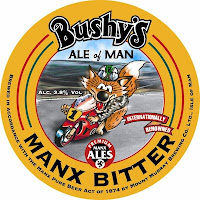 We have teamed up with Bushy's boss Martin Brunnschweiler to create a special ale for Litfest. The only problem is, we don't have a name for it. And that's where you come in.

This week we're asking our friends and followers to suggest a name for the Litfest ale. This being a literature festival, we're thinking that names that have some kind of literary link or theme might be best. But who's to say what kind of ideas we're going to receive from you lot...

Suggestions can be made in the comments section below this blog post, by tweeting us over on Twitter, or on Facebook - either post a comment to our FB page, or reply to one of the FB posts about this competition. You can also email your nominated ale names to manxlitfest@gmail.com

The deadline for suggestions is midnight (IOM time) on Friday, September 24. We'll then gather them all together, pool our collective wisdom (won't take long) and announce the winner a couple of days later. The winner will receive two tickets to the (invite only) official Litfest launch reception at the Villa Marina on Thursday, September 27 (5.30pm-7.30pm) and two tickets to a Litfest event of your choice (subject to availability).

So, ladies and gents, start your engines... and get those suggestions rolling in!