With our 2013 festival seven months away, we're in that exciting period where we secure authors/poets/storytellers and announce their participation to our growing pack of eager literary fans. 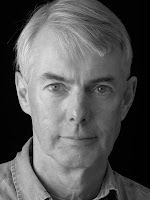 The first name to be announced, earlier in February, was Andrew Taylor - and what better way of kick-starting the Manx Litfest Reading Club in the run-up to September's festival than by choosing Andrew as our reading choice for the month of March.
So, for the next 31 days, indulge yourselves in Andrew's work. No set book - if you're new to his work, then perhaps a standalone or the first in one of his series; if you're a fan, then find one of his books you've not got round to reading.
One thing's for certain - Andrew has a long enough back catalogue to choose from.
His first novel Caroline Minuscule, published in 1982, won the Crime Writers' Association's John Creasey Memorial Award - and the awards kept on coming.

He is the only author to have won the CWA's Historical Dagger twice, with The Office of the Dead and The American Boy - the latter, a gothic mystery linked to Edgar Allan Poe's childhood years in England, was a Richard & Judy pick in 2005. Andrew also won the Cartier Diamond Dagger for sustained excellence in crime writing and over the years has been shortlisted for a host of leading awards.
Other landmarks include the Lydmouth series - eight crime novels in total - set in a 1950s fictional town (Lydmouth) on the England/Wales border, and his Roth trilogy, which was adapted for television as Fallen Angel and broadcast on ITV1 in 2007, starring Charles Dance and Emilia Fox.
The chilling Bleeding Heart Square was named winner of Sweden’s Golden Crowbar, the Martin Beck Award 2009, and also shortlisted for the CWA's Historical Dagger.
His latest offering, The Scent of Death, has just been published.
So take your pick - you're spoilt for choice. Feel free to post your thoughts on this blog post or when you see discussions start on our Facebook page.
We'll announce the Reading Club's choice for April in due course...

Posted by Manx Literary Festival at 10:03 AM