​​Paying what's due, because it's the right thing to do

The payment of authors - and not forgetting poets, illustrators and storytellers - for attending literary festivals is an issue that has been gathering pace in recent years, and looks like it's about to start knocking down buildings. In fact, the payment of authors isn't the issue - it's the non-payment.

It hit the headlines today with Philip Pullman's announcement that ​he has resigned as patron of Oxford Literary Festival 'because of their attitude to paying authors'. It seems Oxford doesn't pay its authors (in monetary terms), but it's not alone there, as Guy Walters attests in this piece about Hay Festival from a few years ago.
As Pullman told the Guardian today, if festivals are paying everyone else - the marquee suppliers, the venues, the brochure printers, the caterers etc - then why is it the author, the very reason for the festival taking place, is expected to work for nothing? 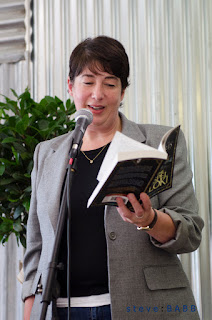 It's a view shared by Joanne Harris, who was with us for Manx Litfest 2015 - this is an article she wrote in March last year - and Nicola Morgan, who mentioned us in this post ahead of her visit to the Island in 2014.

Oxford's response on its website says that, as a charity with no government or public funding, and with around 500 speakers each year, it wouldn't be able to stage a festival if it had to pay all of its authors.
When we started planning Manx Litfest back in early 2011 (the first festival was held in September 2012), we made two very deliberate decisions - first, we established the festival as a charity. The team involved were not doing it to make money, but for the love of literature - and to create something very special in the Isle of Man. The second decision was, well, not even a decision - paying authors just seemed like the natural thing to do. Why wouldn't we pay them?
We also knew that the charity status would stand us in good stead for applying for funding from the Isle of Man Arts Council and Culture Vannin, who have both continued to support us each year. We have several corporate sponsors, including three who support the major events (in terms of cost/organisation), the family day, the writers' day, and the schools day. Between them, those five organisations make the festival possible, but we also need the support of those organisations who sponsor other individual talks and events.
I can see where Oxford is coming from, to a point. It's not easy. The costs can be crippling, and we've had to learn to box clever, in all areas. In our first year we found that the rates some authors charge - a small minority, anyway - was way above what we had planned for, and we got our fingers burned. But we learned our lesson. Of course, we have around 13-14 visiting authors each year - much more manageable than a festival of 500 authors. Indeed, looking at Hay as well, it could be that it is the larger festivals that don't pay authors. Maybe they don't have the resources, maybe they feel that their events are so prestigious compared with the smaller festivals - and they are, to be fair - that authors will attend because of the size of the crowds, and the publicity and column inches their events will generate.
Fundamentally, however, it still comes back to the main issue - authors are being asked to work for nothing; and not just for nothing, but for nothing while the vast majority of suppliers to a festival will be getting their hard-earned. 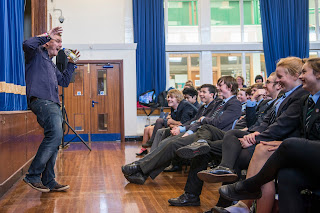 If you're hosting the number of speakers that the bigger festivals do, and having a similar number of events, and enjoying (as I understand it) probably bigger crowds than the smaller festivals, your ticket receipts should be so much higher. Bottom line, between receipts and sponsorship, you have to ensure your income is enough to cover paying everyone, authors included.
Not paying our visiting authors wasn't something we were prepared to entertain, and the feedback we have received over the last four years has been positive. They appreciate the overheads involved, and that makes them really appreciative of us paying them a fee. It's a flat daily rate, and it's hardly at the retire-to-the-Bahamas level, but according to a survey carried out by the Society of Authors last year, where they asked festivals if they paid their authors, and at what rate, then the level we are paying is decent (certainly looking at what Nicola Morgan says in her post from last year).
Some debut authors approach us and ask to attend, and usually don't expect a fee - they understand that if you're putting on an event with an unknown/new author, it can be difficult to make it cost-effective if you're having to cover an appearance fee, along with the accommodation and travel expenses we pay (and being on an island, the travel is a much larger factor than for most festivals). But we always look to pay them too, even if it's not the full rate. We've even had one or two well-known authors waive their fee as a contribution to the Litfest charity, which was a lovely gesture, but certainly not expected.

All that said, we know we have one or two issues we want to address. Each year, several Isle of Man authors are involved with the festival, often as panelists at the writers' day, or as part of the team we send out around schools on the Friday. Some might not have have the kind of readership to warrant a solo event, but they are incredibly keen to support what we are trying to do, and the festival is much richer (artistically) for their efforts. So we are looking to attract additional funding to allow us to pay our local writers a fee too, because it's the right thing to do. End of story.
John Quirk, Festival Director
Posted by Manx Literary Festival at 3:44 PM